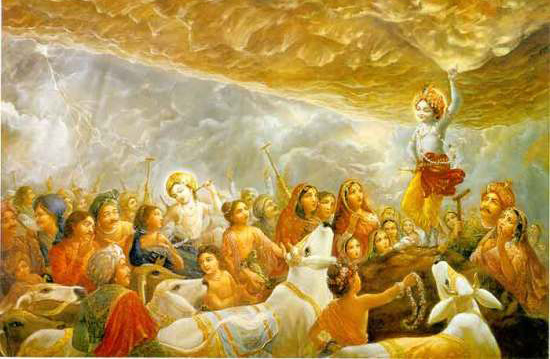 Govardhana Lila and the God of the Gods

Krishna is drawing the attention, not only of the inhabitants of Vrindavan, but of all of us, to that which is essential, that which is central to our well-being and our nourishment. After finding out from Nanda Maharaja through various inquiries about the nature of the sacrifice they were preparing, the Indra yajna, he then dismissed it all and directed everyone’s enthusiasm and all the paraphernalia that had been gathered towards the worship of Govardhana. Why? “Our livelihood is derived from the “go“, from the cows,” Krishna said, “and that which increases the livelihood of the cows, nourishes them, and causes them to flourish—that is what is essential to us.” That is Govardhana Puja.

In a sense, Krishna is telling us we should focus our energy where it will do the best good. Not on the periphery but in the center. Life is short; time is limited. We should learn how to do the most for our self-interest in the shortest amount of time. We should sort out and ascertain what is essential. This is the very idea of bhakti: directing our innate serving nature and tendency in that one place where we will get the most benefit. There is a spot in the brain when pressed the whole body becomes paralyzed. So, it’s like that; pressing on this one spot, Krishna consciousness, we will paralyze, suspend, our material life altogether and gain access to real life—spiritual life.

Spiritual life is our self-interest and our self-interest lies in sacrifice. So rather than worshipping Indra or anyone else, Krishna taught the inhabitants of Vrindavan on the occasion of the Govardhana lila to worship the cows and that which gives life to the cows, which gives life to the cowherd people. “Go” means cow, “vardhana” means to nourish. Go also means veda. So this same idea, he taught us to focus ourselves such that the real heart of go—of the veda—will be nourished and revealed.

Krishna is saying, “Let us worship what the Vedas are really about. Let us do what will bring out, churn out, and expand what the Vedas are truly all about.” This is the very idea of bhakti. So in the Govardhana lila Krishna emerges for all the inhabitants of Vrindavan and all of us as the supreme God of gods, as the indra (god) of Indra.

The nature of Krishna lila is such that his devotees and himself are involved in an intimate relationship which, by the necessity of intimacy, causes the Absolute to appear finite. For the finite to come close to the Infinite, the Infinite takes on a finite appearance, but the fact remains that he is infinite and supreme to the extreme. So Krishna says, “Put aside all this arrangement for worship of Indra, we will worship Govardhana, the hill that sustains our cows and thereby us.” This is the significance of Govardhana Puja.

Krishna says in the Bhagavad-gita, vedais ca sarvair aham eva vedyo vedanta vit veda krt eva caham, “By all the Vedas I am to be known, Vedanta is compiled by me.” If you really want to worship the Vedas, know that they are searching after me, finding me. This will nourish us. As the self, the soul, is more dear to us than the body, Krishna, Govinda, is more dear than our very soul being the source of its sustenance. So Krishna says, “Put aside the Indra yajna and worship Govardhana.” And he tells everyone how to perform Govardhana puja: by offering stacks and stacks of food, and the deity of Govardhana made his appearance and demanded food.

Toward the end of the Govardhana lila, the gods are proclaimed that Krishna is the supreme Godhead, that worship of him is the real interest of everyone. The best way to serve our self-interest is by worshipping Govinda. We have to give of our self, that is our very nature. We are a unit of self-giving tendency. We give our self to the mind, we give our self to the call of the senses, to the world. We have to find that place where giving our self, our self-interest will be drawn out to the extreme. And in human life we have the chance to do it, but time is short. So all the gods in this lila have proclaimed to us that this is what should be done. They are all worshipping Krishna. But how to worship him? How the gods did it is one way. But how the friends of Krishna and the other inhabitants of Vrindavan worshipped him—that was far, far better, and very extraordinary! They were all making light and just having fun and joking. As the demigods flew off into the sky, Krishna’s friends again grouped together around him and started picking up the paraphernalia and slapping him on the back, laughing, “What are you wearing that crown for?” “Who was that fellow with the four heads offering prayers and dandavats?” “And what was that funny elephant and that guy with eyes all over his body?” And so on, poking fun as Krishna laughed with them, sharing the gifts of the gods, decorating them and so forth.

In all of this, of course, the gopis are not left out. In the Govardhana lila they had a chance to see Krishna in the open. They had a chance to touch Krishna when they were circumambulating the hill and the cows. And when Krishna wanted to get close to a gopi, he would twist the tail of a calf and push the calf in the direction of that gopi and then he’d have to go and get the calf, and in the struggle, Krishna would brush against them and they would get to touch him and their life was made successful.

Normally, for the gopis to look at Krsna would be suspect, it was not appropriate. But when he was lifting the hill everybody got a chance to look. There was no harm for them to look directly at him and he looked indirectly at them. It is said that he held his hand with the small finger up. He held the hill on one finger so that the others could be bent down andwould not block his vision. In this way he could see through and take a glance at the gopis and Sri Radhika. Therefore our Gaudiya acaryas have said that he got the energy to lift Govardhana hill from Radhika, his primal sakti, glancing at her, thinking of her.

So the gopis had the opportunity to get closer to Krishna than they had thus far, which was their great joy. And Krishna retired to his quarters and what did he do? He played on the bamboo flute given to him by Lord Siva. Jiva Goswami said he played “tu, tu, tu, tu..” “Tu” is a term of familiarity meaning “you, you, you…” And every gopi heard, “I am calling… you, you, you” and their hearts leaped to think that Krishna was actually acknowledging their deepest feelings for him.

This kind of devotion, this kind of worship  is what Caitanya Mahaprabhu taught us to be involved in, to aspire for. Even just to aspire for this, Bhaktivinoda Thakura has said in Caitanya-siksamrta, is such a powerful form of worship. We may not be qualified, but to have that as our aspiration is so powerful, so endearing to Krishna, “Just like my friends and family worship me, you have some appreciation for that, you aspire for that.” This draws the attention of Krishna to us so much.

The gods proclaimed Krishna’s supremacy and Krishna, with his friends, then danced in the forest in their carefree activities of cowherding all the way home, dressed and decorated like gods from heaven. So we should have this kind of aspiration for Vraja bhakti and understand Govardhana Puja in this way.