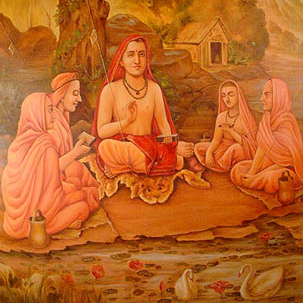 The Brahma-sutras of Vyasa are the first attempt in human history to develop a systematic theology derived from revelation (Upanishads). This early Eastern effort was followed in the West in relation to the Bible, most notably in Catholic scholasticism. It is a pity that the West has not paid more attention to this earlier effort.

Here at Audarya we have been discussing Vyasa’s sutras of late, in an effort to substantiate Sri Caitanya’s scripturally backed (Garuda Purana) emphasis that the Srimad Bhagavatam is the natural commentary on the sutras. We have found no dearth of evidence in support of this conclusion.

As we discussed the tradition of commentary on the sutras that preceded Sri Caitanya’s emphasis of theBhagavata, we reached the obvious conclusion that the most well known commentary, that of Sankara, does not constitute sastra-yukti, or reasoning that supports the position of revelation. Sankara is thus more philosopher than theologian.

In Gaudiya Vedanta faith also means faith in revelation, or that perfect knowing requires a perfect method, and in essence that method amounts to folding one’s hands in prayer. Our intellect is not a perfect instrument, especially when it is wedded to the senseless demand of our senses to quench their unquenchable thirst. Equipped with faulty instruments, what are we left with to pursue perfect knowledge?

We have but our sincerity, our honesty, and honestly the universe is greater than ourselves. Exploiting the world for our small sense of human self in an effort to make the world fit within our mind will only artificially expand our sense of self and furthermore, blind us to the obvious. Exploitation causes the self to contract, and giving causes it to expand. This is the math. If you love someone they will tell you all of their secrets. In this context those secrets constitute revelation.

In what sense does Sankara not adhere to the tradition of revelation he identifies himself with? Sankara does claim to be a patron of revelation. Perhaps he is more of deviant theologian than a philosopher. At any rate, his idea that the form of Krishna is a limited expression of Brahman has no basis in revelation. Sri Caitanya characterizes Sankara’s imaginary commentary on Vyasa’s sutras thus: “Sankara more or less says that Vyasa was mistaken or crazy—vyasa-bhranta—therefore Sankara himself will give the proper understanding aside from what the sutras themselves say.” (Cc 1.7.121).

Sankara’s departure form sastra-yukti appears first in his highly interpretive explanation of sutra 1.1.17. This sutra appears in a section in which Brahman is described as having qualities. It begins with the statement anandamayo ’bhyasat, “Brahman is joyful.” (Vs. 1.1.12) Sutra 1.1.13 states that Brahman is not made of joy (a creation), but rather possessed of an abundance of joy. Evidence for this is offered in 1.1.14, which states that since Brahman is designated elsewhere as the cause of joy (Taittiriya Upanishad 2.7) he must be full of joy. Sutra 1.1.15 states that the scripture of joy (Taittiriya Upanisad) also celebrates Brahman as being joyful. Following this, in sutra in 1.1.16 that which is Brahman and joyful is distinguished from the individual soul. The Brahman who is joyful is also described in the scripture as being the creator. Thus it is Brahman who is described as joyful and not the individual soul, for only Brahman is described as possessing the ability to create the world. Sutra 1.1.17 then states that the individual soul and Brahman are declared to be different, bheda-vyapadesac ca. Even Sankara himself admits that sutras 1.1.16-17 concern the difference between Brahman and the individual soul. However, Sankara adds his own comment, declaring that the difference only exists on a lower level of reality (vyavaharic), whereas in ultimate reality (paramarthic) this illusion of difference ceases to exist. However, nowhere in Vedanta-sutra is there any reference to Sankara’s two levels of reality and thus two levels of Brahman—a provisional manifestation of the Absolute (Krishna/the avatara/isvara) and an ultimate reality (unmanifest, indeterminate Brahman).

Thus Sankara has attached his own doctrine to the sutras. In this doctrine he calls his provisional manifestation of Brahman “saguna Brahman,” Brahman with material adjuncts. The form of Krishna assaguna Brahman is thus considered a manifestation of Brahman constituted of the material quality ofsattva that serves the purpose of helping individual souls realize the illusion of their individuality, at which time the form and person of the avatara is dispensed with as the enlightened realizes himself to be Brahman.

According to Sankara, those not qualified to meditate on Brahman should worship his idea of sagunaBrahman to gradually qualify themselves for meditation on the formless Brahman. This is no doubt a creative philosophy, but nonetheless a huge departure from revelation.

Such a departure may not concern many today. However, those who are not bothered by it should be bothered by how it plays out into Sankara’s nonexistent world of our experience. Then again, perhaps we are at the liberty to pick and choose, but if we feel justified in doing so we would do ourselves a favor by writing all that we pick and choose down and then looking it over to see how comprehensive and coherent it is.

Sankara makes a fairly coherent argument. He was a good philosopher. However, he had a hard time wrapping his head around the all inclusive nature of Krishna’s form, as it is described in revelation. So too do many today. Thus the need for Gaudiya Vedanta.