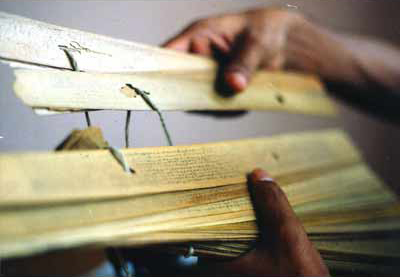 Svarupa Damodara Goswami has advised us as follows with regard to writing on transcendental topics and rasa sastra in particular.

“If you want to study Srimad-Bhagavatam, you must approach an advanced Vaishnava surrendering exclusively at the feet of Sri Caitanya. Always associate with the devotees of Sri Caitanya, for then only will you understand the siddhanta of the waves of the ocean of bhakti. Then your learning will be fruitful, and you will be able to describe [write about] the transcendental pastimes of Krishna without material contamination.”

This is the principle involved in writing on transcendental subjects. The detail of being educated in the rules of Indian aesthetic theory must also be in place if one is to write transcendental poetry, or rasa sastra, in our sampradaya. In this regard, Mahaprabhu said the following about Sri Rupa and his poetry: madhura prasanna ihara kavya salankara aiche kavitva vinu nahe rasera pracara, “His poetry is sweet, pleasing, and replete with literary ornaments. Without such poetic qualifications there is no possibility of disseminating rasa.”

This does not mean that one needs to be a poet in order to be a medium through which others experience rasananda. It means that writing original poetic works concerning Krishna lila as the Goswamis did requires this kind of education as well as the necessary realization derived from taking shelter of a Vaishnava of consequence.

Thus only very qualified persons with proper spiritual and material training can write rasa sastra. The Goswamis of Vrindavana represent this standard. Our task is to explain and comment on their work. Actual insight into the lilas of Krishna will be apparent in the writing of those who can draw down the theological and philosophical implications of these narratives and help others apply them in their practice. Those who appear to write about lilas that they themselves are experiencing are suspect at best. We need not worry about writing rasa sastra ourselves, nor do we need to worry about what to read when it comes to rasa sastra—we should read Srimad-Bhagavatam, Caitanya-caritamrita, and the granthas of the Goswamis relative to our guru-determined eligibility.

Otherwise, in general there are two things to be avoided when writing about Krishna: rasabhasa and siddhanta-virodha. Mahaprabhu could not tolerate these two discrepancies, rasabhasa haya yadi siddhanta-virodha sahite na pare prabhu, mane haya krodha. We do not find these things in the Goswamis’ writings.

Siddhanta-virodha is a discrepancy in tattva, or the metaphysical truth of devotional conclusions. Technically speaking, rasabhasa is a discrepancy with regard to elemental constituents of rasa that results in a semblance (abhasa) of rasa. Rasabhasa is not undesirable in every respect. However, when two incompatible sentiments interact under certain circumstances, this is called virasata, and this virasata results in something less than the full experience of rasa. Because it results in only a semblance of the full and spiritually satisfying experience of sacred aesthetic rapture (bhakti-rasa), it can also be called rasabhasa, and because this virasata causes an undesirable distasteful effect it is to be avoided. When Krishnadasa Kaviraja cautions us to avoid rasabhasa, he is primarily speaking about this sense of rasabhasa arising out of virasata and secondarily about the predominant expressions of rasabhasa involving discrepancies with regard to the fivefold elemental constituents necessary for rasa to occur.

However, the mixing of incompatible sentiments (virasata) does not always produce an undesirable effect, and Rupa Goswami describes the conditions under which this does and does not occur. Detailed information on this complicated topic can be found in the last two waves of the Northern division of Rupa Goswami’s Ocean of bhakti-rasa. These are the final chapters of his treatise, Bhakti-rasamrita-sindhu.

Therein, Rupa Goswami gives examples of rasabhasa found in sacred literature that are not necessarily distasteful, but as the term rasabhasa suggests, they involve emotional exchanges that do not rise to the aesthetic height of rasa. Aside from virasata resulting in rasabhasa there are three types of rasabhasa: uparasa, anurasa, and aparasa. Uparasa-rasabhasa occurs when one of the fivefold ingredients of rasa (sthayibhava, vibhava, anubhava, sancari-bhava, and sattvika-bhava) is distorted. For example, when the sthayibhava of conjugal love is not mutual between two parties, this does not allow the emotional experience to rise to the condition of madhura-rasa. The wives of the yajnika brahmanas expressed romantic sentiments for Krishna like those of the gopis, but Krishna did not have the same sentiments for them because they were brahmanas rather than vaisyas like himself. Thus instead of tasting madhura-rasa, they experienced a semblance of it, or madhura-uparasa-rasabhasa, due to the absence of mutual sthayibhavas between themselves and Krishna. Madhura-rasa-uparasa can also occur when the vibhava or anubhava are distorted. In each of the other four primary rasas, uparasa can also occur under certain conditions.

Anurasa-rasabhasa involves a semblance of rasa appearing rather than aesthetic rapture of rasa itself due to the fact that the sentiment experienced is not related to Krishna. When Narada saw two parrots in Vrindavan reciting Vedanta he was astonished (adbhuta), but because his astonishment was not in relation to Krishna it amounted to anurasa-rasabhasa.

Aparasa-rasabhasa occurs when those who are not devotees experience a semblance of rasa, as when demons in Krishna-lila appear to taste rasas such as laughter (hasya/Jarasandha), fear (bhayanaka/Kamsa), etc. Only devotees can experience bhakti-rasa.

Of the above three forms of rasabhasa, uparasa comes closest to actual rasa, followed by anurasa and aparasa. It appears that all three of these forms of rasabhasa are for the most part relative to the manifest lila of Krishna and not to the unmanifest lila of Goloka. In this sense they may also be considered undesirable. Otherwise, uparasa-rasabhasa in particular has some utility because it brings one in touch with ecstatic love of Krishna.

Writing rasa sastra, as with reading rasa sastra, should be done according to spiritual qualification, which itself will become clear through engaging in Harinama-sankirtana, guru-seva, and the study of Gaudiya siddhanta. Thus it is these activities that we ought be concerned with.