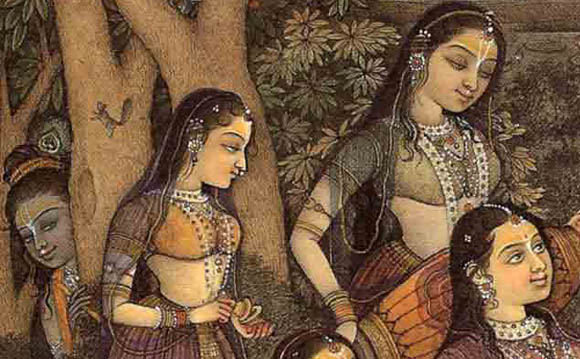 Sri Chaitanya taught that kirtana is the most efficacious means of spiritual attainment in this age, sarvatma-snapanam. Jiva Goswami has explained in Bhakti-andarbha that in Kali-yuga all of the other limbs of bhakti enunciated by Sri Prahlada in Srimad Bhagavatam must be accompanied by kirtana to be effective.

Sri Chaitanya also taught that the method of worship conceived of by the gopis is paramount, ramya kacid upasana vraja-vadhu-vargena ya kalpita. The Srimad Bhagavatam’s Gopi-gita describes an instance in which the gopis themselves performed kirtana with a view to be reunited with the high note of their life.

Krishna had left the gopis after inviting them with his flute song to dance with him in the moonlit forest of Vraja. Searching for him everywhere, in madness they began to sing. In nineteen songs they heralded their heart’s necessity to dance with their love. In so doing, they repaired their broken heartstrings that had frayed from his separation. In their param kirtana, one gopi sang in praise of the song itself. This song is in praise of songs about the source of all sound, the source of all sound himself, and those who sing his virtues in the ears of the spiritually deaf. It was this gopi’s song that so much pleased Sri Chaitanya. When he heard it, he lost all sense of socioreligious convention.

In Puri, in a trance of ecstasy, Sri Chaitanya heard the Gopi-gita of the Bhagavata from the lips of Maharaja Prataparudra, the king of that oceanside city of Sri Jagannatha. The king had been fine-tuned by Sarvabhauma Bhattacarya, a recent convert of Sri Chaitanya’s who abandoned his drone of logic (nyaya) for a symphony of love (prema). The king learned from the Bhattacarya how to make harmony with the inner sentiments (bhava) of Sri Chaitanya by reciting the songs of the gopis. When he reached the song of songs, Sri Chaitanya awoke from his trance as if answering to a trumpet. “ Go on reciting! Go on reciting!” he cried to the king, bala, bala’ bali’ prabhu bale bara bara.

Before the king reached this verse, he began to sing jayati te ‘dhikam janmana vrajah.’ This is the first of nineteen songs that constitute the Bhagavata’s Gopi-gita. This thirty-first chapter of Srimad Bhagavatam is very melodious. In each line the first and seventh syllables begin with the same consonant, as do the second syllables of all four lines, with but one or two exceptions.

In the first verse, the gopis praise the land of Vraja, which has become glorious due to Krishna’s birth therein. It is because of this that the goddess of fortune forever resides in Vraja. She resides here, however, as just one of many waiting her turn to associate directly with Krishna. In Vraja, Laksmi takes refuge, something she does not do in Vaikuntha. In the spiritual world with Narayana as her husband, Laksmi holds a special position, but in Vraja her pride is diminished. Such is the superexcellence of Vraja. Thus Vraja is jayati, victorious in the most complete sense of the term. Vraja is the best of places, superior even to Vaikuntha, the spiritual world itself.

Krishna appeared in Vraja to make that land glorious. But what is a country without its people? Thus a gopi implies in this first song that Krishna must make the gopis glorious as well by fulfilling their desire to untie with him. After all, Vraja is the gopi’s village. Is it proper then that they should have to look here, there, and everywhere for him, when they demigods such as Brahma are getting his darsana? Should not the local people have the

first consideration, and amongst them the gopis who have risked so much for his company? The the first gopis sings, “O most merciful one, look upon us just once. We are holding our breath (stopping our life) in anticipation of your return. We could have returned to our homes, for it is indeed quite late. We could have thought, ‘Our purpose will be better served if we wait and continue our pursuit in the morning.’ But there is no morning for us, if we do not find you on this night!”

Continuing his recitation, the king sang the words of the gopis, accusing Krishna of murder for not glancing upon them. “By his glance he steals away the beauty of the autumn lotus. He is therefore a thief, and a thief is often a murderer as well, especially a big thief. Only a very big thief can steal that which is protected on all sides, as is the autumn lotus, seated in the water. So also is the treasure of our heart carefully protected, yet this thief cares not for that. Such a thief is capable of anything!”

They reminded Krishna of his killing of various demons, and again petitioned him to protect them now from the demon of their inner passion, which burned due to their separation from him. The gopis identified Krishna as the one that Brahma petitioned to protect the earth’s inhabitants, surely therefore he should now protect them.

Then the gopis put forth a fourfold petition to experience the lotus hand, lotus face, lotus feet, and lotus lips of Krishna. Following this, one gopi sings of the virtue of song itself, song, that is, that is about Krishna. King Prataparudra sang this song and Sri Chaitanya responed as described above.

“Song about you is like the nectar of immortality (kathamrtam) that gives life to those who are suffering in the world of birth and death (tapta-jivanam). It therefore possesses the opulences of knowledge and detachment. Such song is praised by poets (kavibhir iditam) who know the value and meaning of words and their arrangement. Composers themselves are amazed at the beauty and efficacy of those songs about you, which are original and not of human origin. Great thinkers and speakers offer homage to your praise that appears from the lips of your devotees, having been infused within their hearts by you yourself. The by-product of your praise is the sum and substance of knowledge and detachment (jnana vairagya).

“Song about you destroys the effects of sin (kalmasapaham). It is therefore virtuous and heroic, the very essence of dharma or righteousness, which is real strength (viryasya). Those who hear it become fortunate (sravana-mangalam), and fame (yasasah) accompanies them wherever they go. Thus their lives become spiritual and auspicious, for this good fortune and fame are not ordinary. This is so because by singing this song one attracts the attention of Sri, the Lord’s consort, who blesses such devotees. Thus the song is full of beauty, wealth, and spiritual power (srimad). Furthermore, this song spreads itself all over the world (atatam), yet never diminishes itself, and it is thus the greatest wealth and power (aisvaryasya). Just as you are full of opulences, so is song about you. Those who herald it throughout the land are not mere mortals. They are the greatest benefactors of human society. They represent you in every respect.” (Bhag. 10.31.9)

Sri Chaitanya also exhibited this sentiment when he said na prema-ghando ‘sti darapi me harau, “Not a scent of love of Krishna can be found in me,” and vamsi-vilasy-anana-lokanam vina bibharmi yat prana-patangakan vrtha,”Without seeing the face of the flute player, I continue to live my insect-like life.” This is the sentiment of the maha-bhagavata. While the kanistha-adhikari (neophyte devotee) thinks he or she is a real devotee while all others are in some way lacking, the superlative devotee thinks just the opposite, “All are devoted save and except me.”

This song of the gopis praising the virtue of song about Krishna is the answer to the self-doubt they project as Krishna’s reason for not appearing. “If he is not coming to us because he thinks we are not devotees, having maintained our lives in his absence, we say this: ‘It is not that we are making any effort to maintain our lives. We are not doing that. But song about you which flows spontaneously from our lips is keeping us alive in your absence, such is its virtue. Although you are killing us, your katha is giving us life. Therefore, you must come to us who are your devotees and are in great need.’”

Sri Chaitanydeva came to life upon hearing this song from the king, for song about Krishna is what kept the gopis alive in his absence. Such is its’ virtue. The gopis’ kirtana of nineteen songs produced an intense yearning for the company of Krishna that ultimately caused him to reappear before them. Thus in the beginning of the following chapter, Sukadeva Goswami says, iti gopyah pragayantyah pralapantyas ca cirtadha ruruduh su-svaram rajan krishna-darsana-lalasah “Having thus sung and spoken their hearts in words full of charm, the gopis began to weep loudly, hankering for the darsana of Krishna.” (Bhag. 10.32.1)

Our kirtana should produce such an effect. When our chanting the name of Sri Krishna awakens this intense longing, our life’s perfection is not far off. Let us pray for the day when we can actually lament as Sri Chaitanya did in the Gambhira in Jagannatha Puri. Narottoma Thakura has sung in the spirit of Sri Chaitanya’s lamentation thus: gauranga balite habe pulaka sarira hari hari balite nayane ba’be nira, “When, while engaging in Krishna kirtana as conceived of by Sri Chaitanya, chanting Hare Krishna, which is synonymous with the holy name of Sri Chaitanya himself, will I experience transformations of ecstasy, such as hairs standing on end, incessant crying, faltering of the voice, and so on?” Without the transformations of ecstasy mentioned in this song occurring in our life, our kirtana is lacking, our hearts like stone.

“In spite of repeatedly chanting of the holy name, if transformations of ecstasy such as incessant crying and hairs standing on end do not occur, it is to be understood that our hears are like stone.” (Bhag. 2.3.24)

Kirtana is most efficacious in this age, and the method of worship that was conceived by the gopis is the best. We should understand the spirit of that worship, and aspire for it while engaging in kirtana, for this kind of kirtana can melt even stone. Hari-katha has such power to melt the heart that it belittles even the sruti itself. The Upanisads consist of many concise sounds, all of which shed light on the nature of Brahman. Yet these high sounds that take us far from the material realm remain at a distance offering respect to hari-katha.

From the lotus mouth of Sri Caitanya, in his Siksastakam, the unparalleled efficacy of hari-katha has been explained. Si Caitanya wrote down only these eight verses. Yet Jiva Goswami has told us of another verse spoken directly by the greatest advocate of kirtana. In Bhakti-sandarbha, Sri Jiva has said that Sri Caitanya himself uttered the following:

“The utterances of the sruti and Upanisads are distant from the nectar of hari-katha. From such utterances one cannot experience ecstatic transformations, such as the melting of the heart, ecstatic tears, trembling, and the standing of one’s hairs on end.” Experiencing these transformations that amount to prema-bhaki is possible by the grace of Sri Caitanya, and such is the goal of the sadhaka’s chanting. With Sri Caitanya as our guide and the gopis’ love as our goal, chanting the holy name is second to no other as both the means and the end of all spiritual culture.