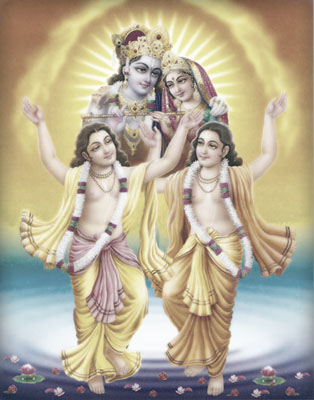 The life that Sri Caitanya came to give has in one sense little to do with morality. The moral codes of living inculcated in the varnasrama social system, although acknowledged by Sri Caitanya, were also rejected by him in his discussion with Raya Ramananda, eho bahya, age kaha ara. “What kind of religion is his?” one might ask, “a religion that ultimately belittles morality?” Yes, it is a religion that takes us beyond the limited scope of moral codes, and no because it takes morality for granted, picking up where morality leaves off. The beauty of this transcendental truth of the pastimes of Sri Krishna is that hearing about it saves us from both moral corruption and the constraints of a life of moral adherence at the same time.

Moralists will have difficulty a first glance with the transcendental love life of Sri Krishna. Yet through the life and precepts of Sri Caitanya they can be saved from the greater difficulty that results in misconstruing the supramudane love life of Radha-Krishna to be immoral and also find the greatest impetus for their moral advocacy. It is through Sri Caitanya alone that we can understand the truth of Krishna lila. His moral life was impeccable and his spiritual ideal was higher than anything that the world has heard about to date, ramya kacid upasana vraja vadhu va kalpita, lawless love in transcendence. As a sannyasi Sri Caitanya strictly adhered to the moral codes governing the renounced order. As an eternal servitor of Krishna, he worshipped the gopis.

About morality one must ask by what criterion shall we determine what is moral and what is immoral. David Hume long ago disagreed with the common belief that the life of the monastery is the standard of morality. He said that the criterion for establishing that which is moral is “usefulness.” For Hume, “Celibacy, fasting, penance, mortification, self-denial, humility, silence, solitude, and the whole train of monkish virtues” were less than useful. Hume wrote that they would be “everywhere rejected by men of sense.” Thus, a strong case can be made for the notion that morality is relative to one’s worldview. Both Hume and the monks insisted that they themselves were moral, while disagreeing as to what a moral life consists of.

In the worldview of Sri Caitanya, a normative conception of morality is one in which norms are derived from the predominant influene of one mode of material nature over another. Influenced by the modes of goodness (sattva), passion (rajas), and ignorance (tamas), we form conceptions of the world and values each of which one could argue is as worthy as any other. Although the very insistence on the necessity of a moral life is born of the influence of the sattva-guna, exactly what one considers a moral life will be determined by the degree to which sattvic, rajasic, or tamasic modes of nature predominate in one’s psyche. One can make an argument in favor of the superiority of the sattva-guna since this mode of nature gives rise to thoughts of justice, either those of Hume or those of the monks, yet such an argument presupposes that some form of moral life necessarily desirable. But is it actually so?

The three modes of nature constitute our psycho-physiological makeup. In conjunction with our relative freedom, they determine our karmic tendencies. Each of the three modes of nature propels us in the direction of different aims. Each of the modes of material nature is independent of the other, and thus each of the goals they inspire us to pursue are equally worthy. The mode of ignorance inspires one to pursue gross sense indulgence. The mode of passion inspires one to pursue higher and higher material status, and the mode of goodness inspires one to pursue justice and a perfect world order. Within the scope of the world itself, transcendence aside, there is no absolute justification for insisting that the life of the monks born of sattva-guna or any sense of morality and justice should prevail within the framework of human interaction. Thus if sattvic morality and a perfect world order are our goal, we must look beyond the sattvic moral life of this world for the necessary evidence to justify our claim that such life in this world is indeed superior.

The only thing that can justify giving precedence to the sattvic mode of conduct is a transcendental objective, which demands sattvic conduct as a prerequisite. If transcendence of the world, and of a sattvic morality itself, is the goal of life, only then can we realize the superiority of the sattva-guna. Ironically, those sharp moralists who view their morality as and end in itself often find the transcendental objective impractical, pessimistic, and useless to society.

It is not at all lacking in practicality, however, when the Vaisnava calls our attention to the impermanence of this life. Is their outlook then pessimistic? Those who hold that it is entirely possible to attain a permanent state of grace, a life of love in eternity, and strive wholeheartedly for this and this alone would seem more optimistic than pessimistic. Pessimistic they are about building a house on the soft ground of this world, but this thought only serves as negative impetus for a life beyond the constraints of the three modes of nature. Furthermore, the Vaisnava’s goal is indeed attainable, while the goals of even the moralists for a perfect world order are absolutely unattainable, what to speak of those under the influence of passion and ignorance who strive for higher material achievements and sense indulgence respectively.

Sense indulgence forever begs for more of the same. As when we pour fuel on a fire it is hardly extinguished, similarly sense indulgence only causes our sensual desires to increase. We will never become fully sensually satisfied. Material achievement also has no limit. As soon as we acquire millions, we desire billions. There is no satisfaction of aims born of the mode of passion. There remains always another higher achievement. As for a perfect world order, the dream of the moralist inspired as it is at least to some extent by the sattvic mode of nature, it will be realized at best when all men and women desire and achieve a perfectly just outlook. However, there is no absolute that determines that such an outlook is universally desirable. Thus there is good cause for the Vaisnava to be pessimistic about the goals born of the modes of material nature. But we must still further qualify our transcendental objective if we seek through it a perfect world order.

Let us strive for a perfect world in such a way that our efforts will bear fruit. Neither the renunciates (jnana marg) nor the moralists (karma marg) will ever achieve this goal by their endeavors. The renunciates who pursue the transcendental objective may attain their goal, but a perfect world they will not. Upon reaching their goal the world ceases to exist. The moralist who seeks the sattvic life in pursuit of this ideal will forever fall short as well, for there is no possibility of any one of the three modes of material nature existing purely without the influence of the other two modes. The mode of goodness is ever tinged by the modes of passion and ignorance. Thus there will always be competing conceptions of morality. Whose sense of morality will prevail? Furthermore, even if pure sattva-guna could be achieved, the moralist’s objective would not be reached, for without the other two modes of nature there would be no movement, no world as we know it. The world means these three modes of nature, all of which pervade everywhere at all times.

The transcendental objective of Sri Caitanya offers more than a little impetus for those who desire a perfect world order. In his religion we find the true moral imperative. Unlike the monistic transcendentalists who ultimately deny the existence of the world altogether, Sri Caitanya accepts the world as real. For Sri Caitanya it is real, yet it is not what we perceive it to be. It is for this reason that his unalloyed devotees are not concerned with getting out of the world, mama janmani janmanisvare bhavatad bhaktir ahaituki tvayi. One who perfectly understands the truth of Sri Sri Radha-Krishna’s divine love sees even this world as an abode of joy, visvam purnam sukhayate. Such a person is the perfect moralist. Moving in absolute harmony with the will of God, such a person can do no wrong, and whatever he or she does is the standard of goodness.