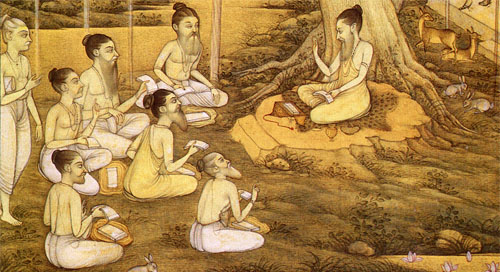 Sacred of the Sacred

In India, the Sanskrit word tirtha has come to be synonymous with sacred place, of which on the Indian subcontinent there are many. From rivers to hilltops to mountains to major metropolises, from Sri Krishna’s footprint in the rock of Vraja-mandala to the whole of punya bhumi Bharata, India and its sacred places are sacred by and large for one reason alone. Sacred places are such because sacred persons, who have crossed over the river of samsara, reside in them. There is no more sacred place than the heart of the sadhu, wherein God himself resides.

The saints are our guides on the sacred tour of life. All traditions have a different conception of what a saintly person is. The Vaisnava is a devotee of the Godhead who appears in innumerable transcendental descents (avataras); the Gaudiya Vaisnava is a devotee of Sri Krishna, the source of all of the Godhead’s descents (avatari). On the other end of the spectrum, the enlightened Buddhists are considered Godless saints. In either case, in all traditions, sacred and secular, the principle of the guide is indispensable. There is no tradition that places more emphasis on this point than Gaudiya Vaisnavism. It is a transcendental culture grounded on this principle—service to the sadhu.

In the Srimad-Bhagavatam, Krishna mentions to the yogi Durvasa, sadhavo hrdayam mahyam sadhunam hrdayam tv aham, “The sadhu is always within the core of my heart, and I am always in the heart of the sadhu.” (SB. 9.4.68) In this regard, Krishna has also distinguished other saintly persons from his devotees: naham tishthami narada yatra gayanti mad-bhaktah, “My dear Narada, I do not dwell in Vaikuntha or in the hearts of the yogis. I dwell wherever my devotees sing my glories.” (Padma Purana) Although Vaikuntha, “that sacred space that is free from anxiety,” abounds with devotees in praise of God, in this verse Krishna has emphasized that a sacred place is so because of the presence of the Vaisnavas in whose company even Krishna thrives.

The word tirtha is derived from the Sanskrit verbal root tr/ tarati, meaning “to cross over.” As a noun, tirtha means a ford, passage, as well as a water hole or bathing place. It has from Upanisadic times been associated with sacred rivers, which are considered places of passage from this world of darkness to the world of light.

The endless flow of the cycle of birth and death is also often compared to a river, the distant shore symbolic of the goal of transcendence. We are to ply our way to transcendence via the ford, the tirtha of passage. Who will be our captain aboard the ship of passage? He who is himself a means of passage, the Vaisnava, the true saint.

When Yudhisthira was told by his half-brother Vidura of his plans for tirtha yatra (pilgrimage), he replied thus: bhavad-vidha bhagavatas tirtha-bhutah svayam vibho tirthi-kurvanti tirthani svantah-sthena gada-bhrta, “Saints of your caliber are themselves places of pilgrimage. Because of their purity, they are constant companions of the Lord, and therefore they can purify even the places of pilgrimage.” (SB 1.13.10) If we are to cross the river of samsara we must find a sacred place for crossing. India’s sacred rivers and places serve as such because along and within them saintly persons reside.

The Bhagavatam informs us that repeated baths in the sacred Ganges has a purifying effect, yet once bathing in the association of saints is immediately purifying: yat-pada-samsrayah suta munayah prasamayanah sadyah punanty upasprstah svardhuny-apo ‘nusevaya, “O Suta, those great sages who have completely taken shelter of the lotus feet of the Lord can at once sanctify those who come in touch with them, whereas the waters of the Ganges can sanctify only after prolonged use.” (SB. 1.1.15) From the Bhagavatam’s timeless history of the life of the Lord and his devotees, we also learn of Mother Ganges’ reservation with regard to descending from heaven to earth. She held back for fear of being polluted by the karma of the many who would bathe in her waters. It was not until she was reminded by Bhagiratha that Vaisnavas would also reside on her banks that she agreed to descend, for they too would bathe in her water, thus purifying even Mother Ganga of accumulated sin. Thus the most sacred of India’s sacred rivers has attested to the sacredness of the association of saints.

We are told that to go to a sacred river and do no more than take bath without hearing from Vaisnavas is to have never visited a tirtha. Such persons have been compared to dumb animals in the language of the Bhagavata, yat-tirtha-buddhih salile na karhicij janesv abhijnesu sa eva go-kharah. (SB. 10.84.13) They are hardly persons who have come any closer to crossing over the material world, reaching the shore of transcendence. The tirtha is not a bathing place, it is a threshold from time to eternity, from the confines of space to the spiritual, from rite and ritual to reality itself.

The Gaudiya Vaisnava tradition abounds with ritual. Yet as important as ritualistic bhakti is even for the Gaudiyas, at the advanced stage of devotional culture it will have served its purpose. This is so not on account of ritualistic bhakti’s defect, but the high devotional ideal of the Gaudiyas, that of following in the wake of the transcendental emotions (bhava) of Sri Krishna’s eternal associates, whose love is born of spontaneity.

Ritualistic bhakti is distinguished from the Bhagavata marga, the path of passionate love. One of the distinguishing characteristics of the Bhagavata marga is its extreme emphasis on the Bhagavatas, the devotees of the Lord. Although ritualistic bhakti also lays stress upon the Vaisnava, the emphasis is even greater in the Bhagavata, or raga, marga. In the raga-marga, the sadhaka is inspired to imbibe the transcendental emotions of the eternally liberated devotees whose love corresponds with their own vicariously acquired affinity for Sri Krishna. It is the devotee from whom we acquire not only the right of passage as in ritualistic bhakti, but to whom we pass. Thus the devotee as tirtha is more than transitional medium, he is both the passage to transcendence and the transcendental goal. For the Gaudiya Vaisnavas, ritualistic bhakti is essential only as much as the sadhaka has not acquired an affinity for hearing and chanting. This affinity is characterized in the Bhagavatam as manoharah (SB. 1.5.26), with attentiveness, or literally, as having had one’s “mind stolen.” With such attentiveness that one cares not for night or day (ratre dine), the sadhaka takes shelter of an eternal associate of Krishna, his guru in spiritual form, the tirtha of tirthas.

The root tr from which tirtha is formed is also found in the word avatara. God’s descent is an ava (downward) tr (crossing), where God descends to humanity. Similarly, the tirtha as devotee is a means of crossing upwards from humanity to Godhead. The deity of the Gaudiyas is Sri Krishna, who crosses down to this world for his sadhakas, but only if his eternal associates come first. It is the Vaisnava who brings Krishna down to earth, and it is the Vaisnava who takes us up to his abode.

About his devotees, Krishna has said in the Adi Purana, ye me bhakta-janah partha na me bhaktas ca te janah mad-bhaktanam ca ye bhaktas te me bhakta-tama matah, “Those who say they are my devotees are not my devotees. However, those who claim to be devotees of my devotees are actually my devotees.” Thus Gaudiya Vaishnavism appropriately lays stress on the principle of the sadhu, the sacred person as sacred place.

That the principle of the sacred person is by no means limited to Gaudiya Vaisnavism or the larger circle of Hinduism is apparent. In the Jain tradition its visionaries are called tirthankaras. Buddhists shying away from what they consider the heretic Jain terminology, in word only reject such. In so many other words and ways they embrace the principle of the saintly person. Rimpoches and reincarnations of lamas and leaders constituting a complex hierarchy are evidence of this principle. The Protestant protest to Catholicism’s priesthood gave birth to Reverends, who are the saints of protest. Recently America’s “contemporary spirituality” has survived a silly rebellion against gurus, at the insistence of none other than the “no-gurus” guru.

Neither is the secular world free to do away with sadhus and gurus. The very term “guru” can be found in any number of corporate enterprises attributed to everything from computers to CEOs, all of whom teach and guide us in rites of passage. Be it secular or religious reality, we cannot do away with this principle. Secular reality for that matter is but spiritual reality misread. The script is the same, and sacred persons better than anyone else read it and thus reveal the sacred nature of our space. India of all places on earth has perhaps best kept this principle in sight, and Gaudiya Vaisnavism has built its foundation on this principle.