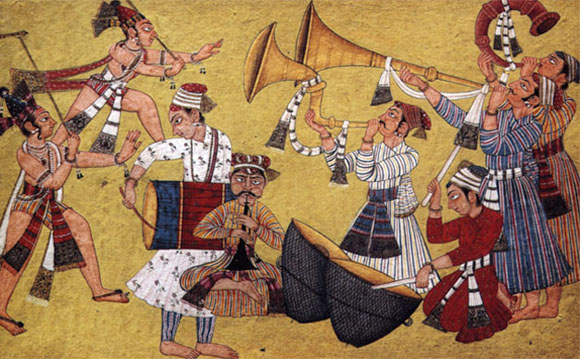 The Glory of Krishna’s Birth

Srimad Bhagavatam mentions a man named Devamidha, who Jiva Goswami informs us was the ornament of the Vrsni dynasty, which is glorified throughout the Vedas and Puranas. A great knight, he settled in Mathura and married two young ladies, one from the royal order, the other from the vaisya caste. From his royal wife issued a son named Sura, and from his vaisya wife a son named Parjanya. Sura begot a son named Vasudeva and lived in Mathura, while Parjanya made his residence in the rural district. Their blood relationship is confirmed in the Bhagavata. (SB 10.5.20,23.27)

Parjanya appropriately took up the profession of cowherding, as one follows in the caste of one’s mother in the case of mixed marriages. His mother was highly regarded amongst the vaisya community. She hailed from the vaisya family from which Brahma himself had abducted his wife, Gayatri, as told in the Padma Purana. This abduction was compensated by the intervention of Visnu, who promised to take birth in the very same cowherd family in the future.

Parjanya’s auspicious birth, which identified him with the twice born as well as the cowherds, is confirmed in the Bhagavata in the words of his son, Nanda, wherein he told Gargacarya to perform the sacrament of the twice born for his own son (SB 10.8.10). He took up residence in Brhadvana and came to be celebrated for his respect for brahmanas and devotees of Visnu. Indeed, he himself worshipped Visnu throughout his entire life.

Parjanya was as magnanimous as his namesake, the cloud, for he bestowed charity in the form of his wealth of milk products in all directions, as does the cloud pour rain indiscriminately. Due to his good qualities, Ugrasena anointed him with the tilak of chief herdsman. He married the fine lady Variyasi and fathered with her five joyous sons. Indeed, he named them after joy, exploiting the root verb “nand” to its utmost, with Upananda, Abhinanda, Nanda, Sananda, and Nandana.

Among his sons, one stood out above the others, such that they too recognized his greatness. So it was that when Parjanya appropriately passed the kingdom of the cowherds to his eldest son, Upananda, he in turn, as the very first act of his rein, crowned his brother Nanda, claming himself to be but a “little (upa) Nanda.” This act met with the approval of all.

Nanda and his wife, the daughter of Sumukha, who conquered her entire family and bestowed glory upon even those who merely heard or saw her, what to speak of those devoted to her, were the natural leaders of the community. His wife was surely his better half, as she lived up to her good name Yasoda, in bringing fame to all associated with her.

Nothing was wanting in the community with Nanda and Yasoda as its king and queen, advised wisely by the elder Upananda, a veritable Bhisma in the court of Vicitravirya. Yet one longing did persist amongst all the cowherds, and this for the misfortune of them all represented by the unfortunate circumstances that resulted in Nanda being sonless, even as he approached his later years.

Although sacrifices were performed for the sake of Nanda’s begetting a son in the womb of Yasoda, all were performed in vain. The reason for this as follows: Nanda confided in his good wife that upon entertaining the thought of conceiving, his mind became filed with a vision of a beautiful dark son, whose beauty and qualities surpassed those of Narayana himself. Realizing the impossibility of begetting a son more beautiful than God, he became disheartened. He could not have such a son, yet having such a desire and vision he could not settle for anything less.

Nanda eventually informed his good wife of his dilemma, only to hear from her that she also had the exact same experience. Amazed, the two considering the coincidence nothing short of divine, undertook a year long observance of the dvadasi vrata, depending upon the satisfaction of God for their desired results; freedom from capricious thinking, and the birth of an actual son as beautiful and as qualified as one could be.

After one year at the completion of the vow, Narayana himself spoke to the couple in a dream. Lord Narayana assured them that they would soon conceive a son, the corresponding fruit of their constant meditation.

At that time a woman ascetic appeared along with a young brahmana. Mystified by their appearance in the settlement, the cowherds asked their auspicious identity, she appearing like the very divine maya of God and he like sage Narada in a fresh new form.

The mysterious lady announced her self as Paurnamasi, like the full moon dressed in saffron cloth. Unmarried and able to divine the future, she was accompanied by the student of Sandipani Muni, Madhumangal, a graduate possessed of mystic powers much like those of Narada. She proclaimed when asked as to the reason for her appearance in the settlement that it was due to the good fortune of its inhabitants, who would soon be blessed, for Nanda and Yasoda were about to have a son!

Overjoyed the cowherds offered to build her a thatched house on the banks of the Yamuna, also known as the Krishna on account of her dark waters. Paurnamasi accepted their proposal, for she was meant to live always nearby Krishna, who more than the river Yamuna referred to the soon to be born dark son of Nanda.

The graceful Yasoda, who was austere by nature, then began to develop the signs of pregnancy. Her appetite changed, marked by intense hankering for all variety of milk sweets, and her natural gravity gave way to whimsy.

Then, at the very time of the child’s birth, along with him and all auspiciousness movements of nature, involving the simultaneous appearance of contradictory features, Maya herself was born as his younger sister. Certainly this is the truth, for it is mentioned in the Bhagavata (SB 10.4.9 and 10.5.1). Yet how is it then that some call this child Krishna the son of Vasudeva and Devaki? Only in as much as Vasudeva is another name for Nanda Maharaja, and Devaki another name for Yasoda, as the Puranas tell us.

Vasudeva never meditated on Krishna desiring to have him as his son. Thus by the law that one can achieve through sadhana only that upon which one meditates, it is clear that Krishna was not his son. In consideration of love, it is obvious that Nanda is the father of Krishna, Yasoda his mother. Vasudeva’s wife, Devaki, admitted this at Kuruksetra. Nor did Vasudeva have any experience of Krishna’s “birth,” an event devoid of majesty save and except in the minds of the parents and family friends. He did, however, experience the majesty of four-armed Krishna’s appearance (krishnavatara), the object of his meditation.