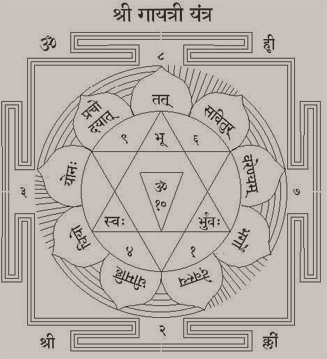 Srila Bhaktisiddhanta Saraswati Thakura gave his disciples the sacred thread and Brahma Gayatri for both socioreligious and spiritual reasons. He incorporated this practice into his Gaudiya mission because hereditary Brahmanas were at that time still viewed as respectable representatives of the Hindu religion. In consideration of this socioreligious circumstance, Srila Bhaktisiddhanta had his initiated disciples wear the sacred thread regardless of whether or not they had been born in Brahmana families. This was his way of teaching that Vaishnavas, regardless of caste, were as respectable as Brahmanas, a point that many people did not understand.

A devotee of Sri Caitanya Mahaprabhu can also consider wearing the sacred thread as part of their spiritual identity (svarupa) in Gaura-lila, as Gaudiya acaryas have determined that devotees of Sri Caitanyadeva are destined to serve as brahmana boys in that realm. If we think of the Brahma Gayatri in this light, we will be chanting it forever. In this way a socioreligious consideration can rise to a spiritual one. Whenever the socioreligious and the spiritual unite, that is a plus; whenever they part, we should follow the spiritual consideration with no loss.

According to Sri Jiva Goswami, Brahma Gayatri petitions no one other than Bhagavan replete with his sakti. He is very clear on this in his Tattva-sandarbha. Scripture also acknowledges that Gayatri Mantra emanates from the flute of Sri Krishna, and the Garuda Purana clearly states that Srimad-Bhagavatam is a commentary on the Gayatri Mantra. As Srimad-Bhagavatam is a meditation on the supreme truth—satyam param dhimahi—so too is Gayatri. The Bhagavatam‘s opening statement indicates that the pastimes of Radha-Krishna (param) should be eternally (satyam) meditated upon (dhimahi).