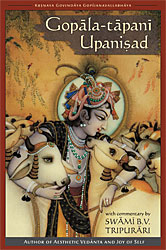 This edition is the first definitive English rendering of Gopala-tapani Upanisad, the most important Upanisad for those following the path of Krishna bhakti. It includes the original Devanagari Sanskrit script, English transliteration, word-for-word meaning, English translation, and an extensive commentary that is both traditional and contemporary.

Gopala-tapani Upanisad is one of the principal 108 Upanisads. It is centered on the significance of the cowherd (Gopala) Krishna and the spiritual practice by which this feature of the divine can be realized. Gopala Krishna represents the heart of the Absolute and is thus realized by the exercise of the practitioner’s heart, from dutiful devotion to love itself.

Within the narratives this Upanisad employs to reveal its esoteric doctrine, the very figure of love personified appears along with love’s object. The perfect object of love, Krishna, while nondual, is not alone. He appears with the milkmaid Gandharvi, identified elsewhere in sacred Hindu lore as Radha. She is his primary sakti. As the principal of sacrifice, self-giving, and love, she exemplifies the means to unlock the mystery of life and live within its secret.