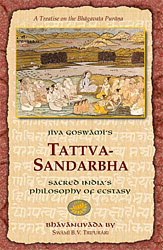 Tattva-sandarbha is a classic medieval work of Eastern philosophy written in Sanskrit prose more than four hundred years ago. It is an introduction to a larger work, Jiva Goswami’s Sat-sandarbha. The original manuscript seeks to explain the esoteric significance of the Bhagavat Purana, arguably the most important volume of India’s sacred literature. This Purana, along with the Bhagavad-gita, is one of the most widely read sacred books int he Indian subcontinent today. At the same time, it is becoming a relevant voice in discussions on quantuum mechanics inthe West. The Bhagavat Purana has been explained over the centuries in numerous ways. Jiva Goswami, the author of Tattva-sandarbha, has suggested a uniquue approach to understanding this Purana. In so doing, he reveals the Bhagavata Purana’s unique concept of nondual consciousness.

In this rendering, Swami B.V. Tripurari enables the reader to access the mind of Jiva Goswami and thus enter into the spirit of a book that would otherwise be difficult for those without sufficient background to understand. This book is deeply philosophical. It also contains many Sanskrit terms that are difficult to render into English. Yet the patient reader will reap the results of a newfound metaphysic that offers a unique solution to the perennial debate as to our oneness with or difference from the absolute, nondualism versus dualism. From this metaphysic, realization of the ultimate pursuit of all living beings naturally arises.

In our times in which consciousness has become a subject of considerable conjecture, the value of an authentic manuscript from a sacred literary tradition that describes the nature of consciousness is immense. Its value is underscored when, as is the case with Tattva-sandarbha, it is written by an accepted spiritual visionary. The thoughts of those who have pondered deeply and actually pursued the nature of consciousness in the past should prove useful to those of us today who are just getting around to thinking about that which we are.

“This book – a blend of philosophy and poetry, science and ethics, speculative metaphysics of the most breathtaking sort and hard pragmatic data about human consciousness – brings to America some of India’s grandest thought. Postmodern ironists beware! Nothing in your upbringing will have prepared you for the subtle philosophical pleasures of this book!”

Andrew Schelling, Chair, The Naropa Institute, Author of For Love of the Dark One: Songs of Mirabai

“Tattva-sandarbha is an inspired gathering of philosophical and mystical insights about Reality. The present study by Swami Tripurari is a felicitous example of scholarship infused with the essential lifeblood of personal spiritual practice. Among other things, it shows that sixteenth century devotional Vedanta has much to teach spiritual seekers on the threshold of the third millenium.”

Georg Feurstein, Ph.D., Author of Shambala Encyclopedia of Yoga and more than twenty other works.

“Swami Tripurari lucidly presents India’s most exalted philosphy of devotion- the highest clutivation of both feeling and reason. Well argued and system atic, Tattva-sandarbha is bound to broaden the readers views of yoga, Hinduism and religion. Such a yogic, mystic theism dwarfs the exclusivist monotheistic creeds that claim to speak for our relationship with Divinity.”

David Frawley, Author of Tantric Yoga and the Wisdom Goddesses and various other works on Vedic knowledge.

“It is a matter of rejoicing that Swami Tripurari has written the book Jiva Goswami’s Tattva-sandarbha. This volume is a significant contribution. I highly recommend it.”

Subhash C. Kak, Professor, Louisiana State University, Co-author of In Search of the Cradle of Civilization.

“This books succeeds marvelously. It conveys a deeper vision and gives a fresh focus. Swami Tripurari exercises an acute philosophical sensibility and helps the reader re-vision the ‘ultimate shelter’ – a love in which God and soul intermingle.”