After visiting Kielce, Krakow, Czarnow, Klecza, and Goleszow on previous trips, this time Swami B.V. Tripurari stayed at a guest house in Cieszonko, part of the small village of Sianowo located in the Kashubia Region, about 40 kilometers from Gdansk in the north of Poland.

Like last year, he brought along his assistant, a well-known artist and cartoonist, Gurunistha dasa, as well as a long-time friend, Bhakti Aśrama Maharaja, for whom it was a first visit to Poland.

Prior to our guests’ arrival in Gdansk, we learned that one week before, after a program in Cartago, Costa Rica, Swami had unfortunately fallen on a staircase. His injury of bruised ribs was so severe that he was sometimes in a wheelchair. When we saw a photo of him in this condition, we were anxious. Was he well enough to cope with the rigors of the journey to Poland and the lectures he planned to offer here? It also happened that he had caught a bad cold and was troubled by a cough.

Though we often saw Swami contending with pain and straining to speak, he created a warm and intimate atmosphere right from the start. He encouraged us to ask questions and praised the devotees, mentioning Gauraśakti’s involvement in developing the Polish sanga as well as the pioneering activities of Gurunistha and Mayapurcandra in Madhuvan.

While waiting for one of the morning talks, we learned it had been cancelled because Swami’s health had unexpectedly deteriorated. Yet, after twenty minutes or so, when Bhakti Aśrama Maharaja was about to speak in his place, Swami suddenly appeared, inspiring enthusiasm and gratitude among the devotees.

Swami’s morning talks focused on the four most important verses from the tenth chapter of the Bhagavad-gita (8–11). As usual, in the evenings Swami entertained questions. His answers included discourses on raganuga bhakti, individual spiritual development, and the writings of Krsnadasa Kaviraja Goswami.

One of his talks was inspired by the spiritual initiations that took place that day, a ritual Swami almost always offers when he visits Poland. Swami initiated Ania (now Bhagyavati) and Gracjana (Nityalila) first, then Guru-vakya. The ceremony was completed by a fire sacrifice (homa) performed by the Sanga’s priest, Bhrigupada dasa.

Bhakti Aśrama Maharaja gave talks as well. With insatiable curiosity, we listened to stories from his life, which he told to illustrate truths contained in the sacred texts. We were amazed by his phenomenal memory, and his extraordinary accessibility and openness won our hearts. He was ready for spiritual discussion any time, even late at night. He talked with us about various spiritual topics, including the nature of the guru/disciple relationship in modern times. We look forward to his future visits.

Many participants noted that the retreat in Cieszonko purified relationships within the sanga, and the ista-gosthi with Swami was crucial in this regard. Aside from Swami’s lectures, we could not remain indifferent to the picturesque beauty of the surroundings. Hence, a kayak excursion across the lakes Gowidlino and Suleczyno and the Slupia River was in order. On the trip, we forced our way through the calamus, trees, overhanging branches, and Indiana Jones-inspired thickets. The adventure even included a short break for a picnic starring delicious samosas.

Three times a day, Nityangi, Nityalila, and all the assistants who offered wonderful kitchen seva swept us into culinary aesthetic rapture. Their art was complete when Bhrigupada, Mayapurcandra, Udharani, and other pujaris who also served at the daily arati ceremonies offered it on the altar. One night, Gurunistha, Kamalaksa, and Krsangi prepared an unforgettable dinner of delicious pizzas.

An evening bonfire garnished with vegetarian shish-kebabs accented the other artful festivities. The Nama-sankirtana sung by the devotees sitting around the fire, accompanied by the guitar music of Śri Caitanya Saraswata Math’s Vidyasundara dasa and “our” Anadi Krsna, reverberated against the starlit Kashubian sky.

In addition to celebrated cooks and musicians, football enthusiasts were also in attendance. Mayapurcandra and Hariprasad dominated the pitch, while those less trained in sport played table football in the hall of the guesthouse. Consequently, two inter-sanga matches took place: Vrinda Mission vs. Śri Caitanya Sangha.

On July 26, the last day of the retreat, Swami, accompanied by Krsna-karanam and Guruvakya as a translator, set out from Gdansk to Warsaw to take part in the radio show called “Philosophers’ Sunday” on Polish Radio RDC. During the show (which you can listen to by visiting this website), Swami mainly spoke about Western society’s perception of the guru and the guru’s role in spiritual practice. His talk was an introduction to a lengthier discussion that the timeframe did not allow. Nevertheless, Tomasz Stawiszynski, the host of the program, invited Swami to complete the conversation on another show next year.

The next day, Swami, Gurunistha, and Bhakti Aśrama Maharaja flew off from Gdansk Airport to San Francisco. Before their departure, the devotees suggested that next time Swami could stay in Poland longer, as he does when he visits his aśramas in the USA and Costa Rica. He replied that he would think about it and invited everyone to Madhuvan. Seventy people attended the gathering, the biggest turnout of all the Polish retreats to date. This enthusiasm is evidence of the growing interest in Swami and his exposition of Gaudiya Vaisnavism in Poland.

Lectures of the 2015 Vaishnava Culture Festival: 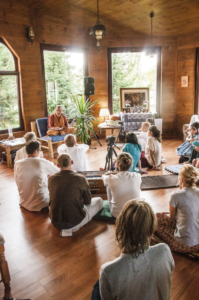 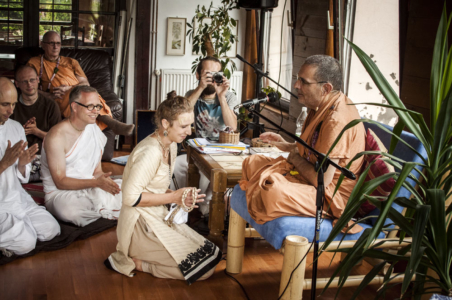 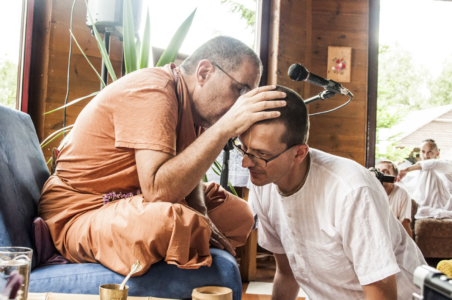 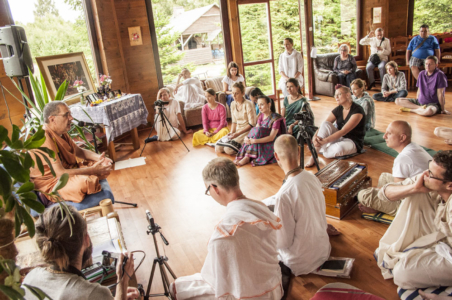 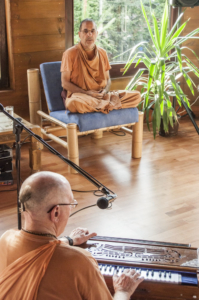 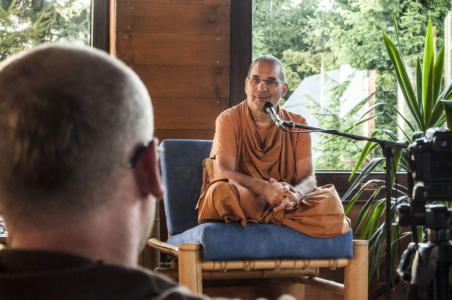 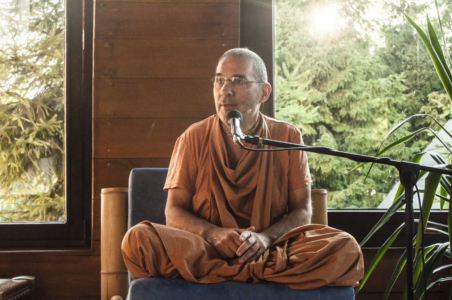 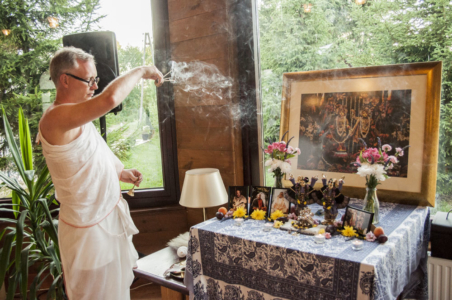 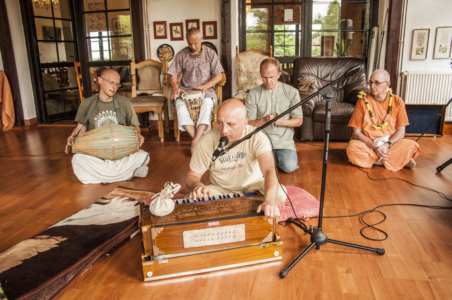 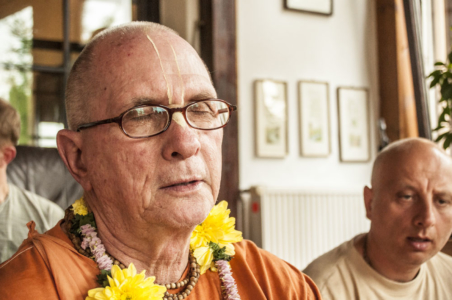 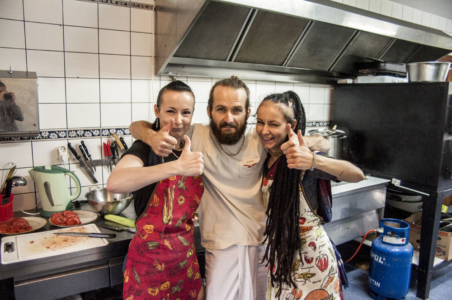 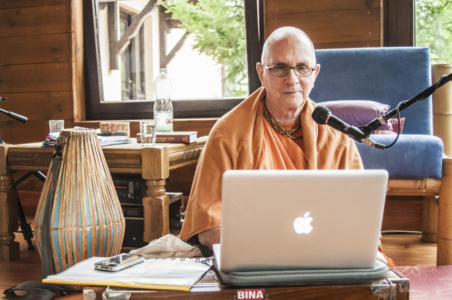 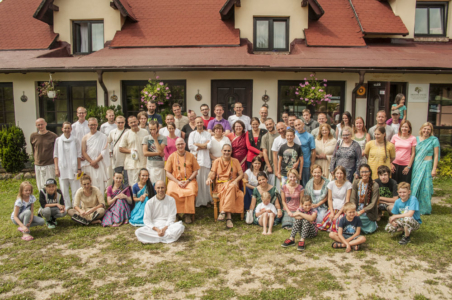 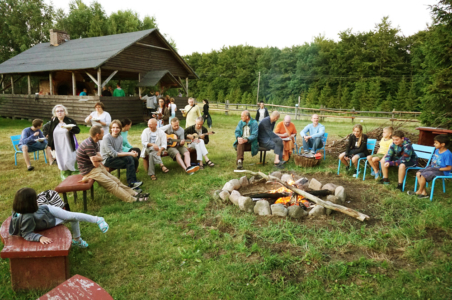 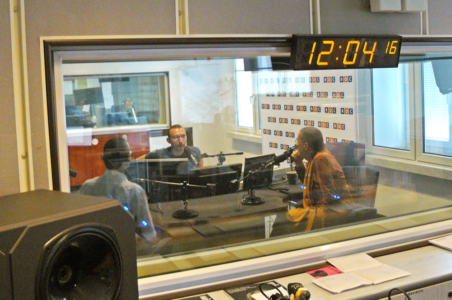 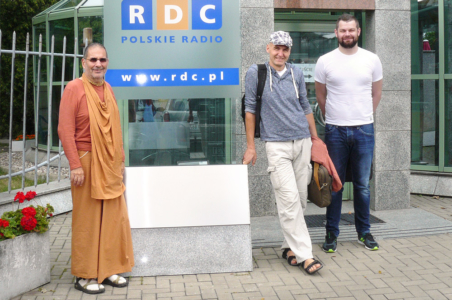